Thermography is an infrared imaging science which uses sophisticated camera equipment to measure the infrared radiation, or temperature, of an object. Initially developed for a variety of military applications, the technology was declassified post-WWII and heavily researched by scientists for use in clinical medicine. Thermography was approved for medical use by the FDA in 1982 and currently is a state-of-the-art medical science.

Today, Thermography is used to monitor physiological changes in the human body. It is a non-invasive and radiation-free, high-tech approach that aids in the detection of inflammation, allergies, and disease. In 2009, during the swine-flu pandemic, governments and airport securities used Thermography to detect potential carriers of the virus. Some of the most common applications for Thermography include the diagnosis and treatment of:

Heat images are captured both in a temperature, or color spectrum, as well as an inverse-grey scale, which reveals the vascular and lymphatic system. This makes Thermography an excellent tool which is safe for any age that your doctor can use to assess your health.
One of Thermography’s most practical benefits is as a preventative approach to breast cancer, performed years before anatomical imaging, such as mammography. This can increase patient treatment options and ultimately improve the outcome. As an adjunct to the appropriate usage of mammography, for example, it has the ability to identify patients at the highest risk and greatly increases the effective usage of these imaging procedures.

Images are taken with a cutting-edge thermographic camera using proprietary software and following strict protocols to generate accurate data. Each scan includes an in-depth report which is interpreted by no less than three PACT (Professional Academy of Clinical Thermology) board-certified doctors, including Dr. Alexander Sepper M.D.

Thermography, with its non-radiation, non-contact and low-cost, has been clearly demonstrated to be a valuable and safe early risk marker of multiple pathologies, and an excellent case management tool for the ongoing monitoring and treatment of disease when used under carefully controlled clinical protocols.

Good thermal symmetry is seen in this picture with no suspicious vascular patterns or significant thermal findings. 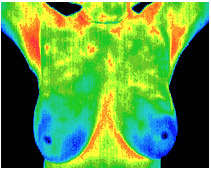 Activity in the left breast returned an opinion of fibrocystic changes taking place. These changes can be monitored thermographically at regular intervals until it becomes reliable enough for annual comparison. 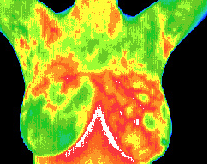 This is the specific area of a small DCIS. We can see the vascular feed and the discreet area of hypothermia that is displacing the surrounding hyperthermia.